Welcome to the first of many campaign battle reports. Over the coming weeks, myself (Sam) and George are going to be playing through the Unexpected Journey Scenarios from the big Hobbit rulebook. We do plan to eventually do the Desolation of Smaug scenarios aswell but we need to source the correct models and scenery.

For this campaign, George would be controlling the mighty band of Dwarves and their allies and I would be trying to stop them. 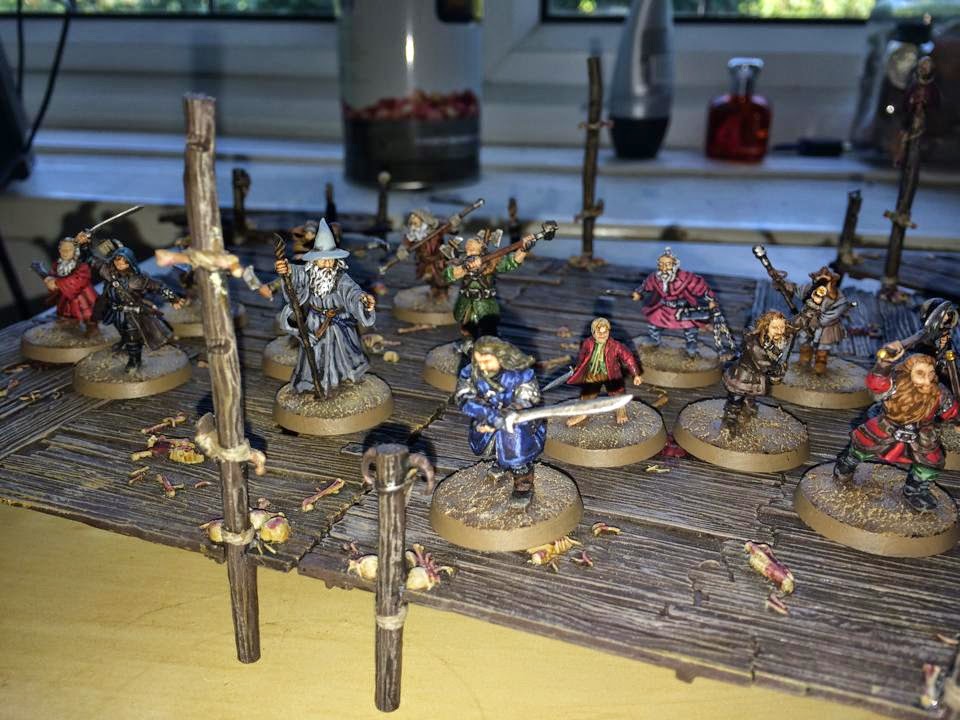 So without further ado, lets begin.

Scenario 1: Roast Mutton
For those who don't know, Roast Mutton is the scenario based on when the dwarves are captured by the 3 trolls (Bill, Bert & Tom).

The trolls start must start within 6" of the camp fire in the middle. Bilbo starts within 3" of Bill and Kili the Dwarf starts on one of the board edges. The rest of the company start in reserve. The trolls cannot strike blow against Bilbo for 3 turns.
So turn 1, Bert advances towards Bilbo while Tom and Bill move towards Kili, foolishly thinking they could take one lone dwarf. Unknown to them, Kili had sent Fili back to fetch the others. On the first turn, all the dwarves bar Fili, Ori and one of the others (cannot remember) turned up. This was bad for the trolls as the finest dwarf heroes were suddenly charging towards them. In the shoot phase, Kili took aim at Bert and managed to wound him. Fate was not shining on Bert and he roared in pain.

Turn 2, all the dwarves charged forward towards the trolls. Their stumpy legs mean't they were just out of range. The remaining 3 dwarves also arrived and hurried towards their friends. In turn 3, hoping to strike some early blows, Bill charged Gloin and Tom charged into Dwalin and Dori. Bert had also charged Bilbo to prevent him moving towards his friends and decided to stuff him in a sack for good measure. In the combat phase, Dwalin & Dori were able to wound Tom but fate prevented the troll from suffering any lasting damage. Bill was far more successful against Gloin, smashing him into dwarf jelly with his log. 1 down, 13 to go.
Turn 4 was interesting. Bert, having stuffed Bilbo, moved towards his fellow trolls to help out with the oncoming dwarves. However he was unable to reach his friends and watched in horror and the dwarves mobbed Bill and Tom.

They say a picture tells a thousand words...you can guess what happened in the resulting combat phase. Both Bill and Tom were slain in an absolutely BRUTAL assault by Thorin and his friends. Revenge for Gloin was swift...so that left Bert, all alone with Bilbo in a bag...

Roaring with anger and no longer hungry, Bert picked up Bilbo (after charging him) and hurled him into the oncoming dwarves. The result was...

...pretty rubbish. Bilbo died (to be expected) but I think only one of the dwarves took a wound, might have been Kili.
In the next turn, the dwarves got up and charged into Bert, Fili was particulary furious over the wound caused on his brother so both Fili and Nori heroic struck to avoid being sneezed on. Nori proved his worth again and was awarded the title of Trollslayer (he also inflicted wounds on Bill). I think Fili may have finished him off.

So, Thorin's Company had prevailed and slain all 3 trolls. However, Bilbo and Gloin had been 'killed' so George would have to roll on the Campaign Injury Table to determine their fate.

George rolled for Gloin first and he rolled a 3! Not dead but would miss ' The Chase'. He then rolled for Bilbo, would the quest be over before it had even began? ... ... Nope, he rolled a 5 and Mr Baggins was free to continue on 1 wound.

THE MOST AUDACIOUS FELLOW (TMAF) - This model regains D6 points of M/W/F/ wounds up to their max characteristics. Chosen by the good player.

MORE LIKE A GROCER THAN A BURGLAR (MLAGTAB) - This model may receive no bonus whatsoever. This must be a model who underperformed in the last scenario. Must be chosen honestly. Chosen by the evil player.

So, TMAF went to Nori for his amazing troll slaying skills and MLAGTAB went to Gloin for being turned into Jelly in the first combat. All other dwarves (bar Gloin and Bilbo) received D3 points back.

As a reward for winning, Gandalf is allowed to call one free heroic move in The Chase scenario.

So that is all for now folks, stay tuned for the next scenario coming soon. Thanks for reading!

Posted by Midsussex Wargamers at 12:09 No comments: