"Well that's it then, bring the ship back up to combat alert alpha. I want everyone at their stations." - Captain Keyes

Welcome back to the MSWG unboxing of Halo Fleet Battles. In the previous blog post, I showed off all the components in their untouched glory. If you thought they were impressive on the sprue, wait until you have seen them built.

The ships are all very simple to put together, you get a detailed instruction pamphlet but after the first ship of each class, you don't really need it. When cutting out the various bits of ships (especially the curvy covenant ones) be careful not to damage the parts with clippers, it is easily done as they aren't organised on the sprue very well. The same goes for the clear bases, the plastic is brittle and it is easy to take chunks out the base if you're not careful.

Lets get down to business. 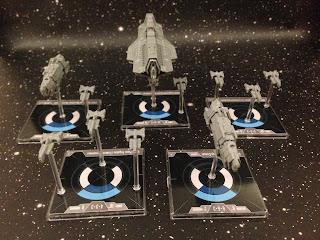 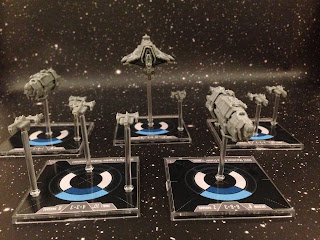 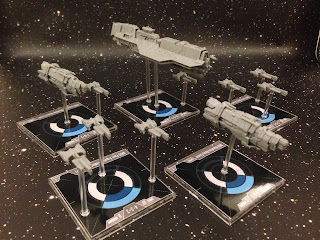 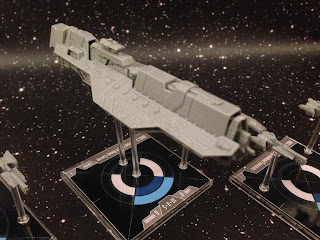 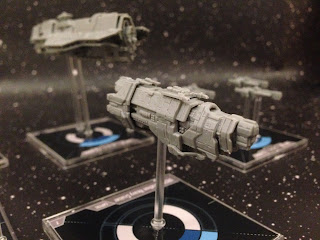 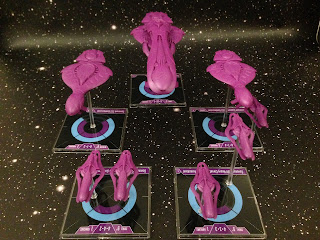 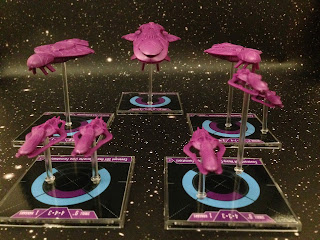 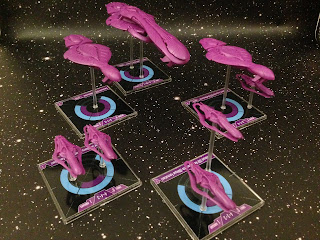 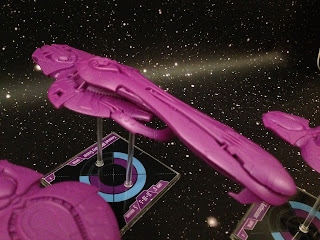 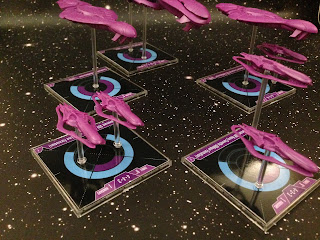 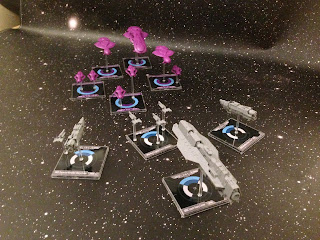 I got so excited setting these up on the flight stands, it just screams AWESOME! Stunning models and they are just perfect. Even if I never play a game, they will look pretty on my shelf.

I'll confess I am yet to play a game but after many weeks of reading, I have some idea of how the game plays. I have all the ships built and ready to do battle. 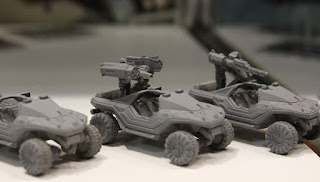 The above photos were from Gencon 2015 where Spartan Games showed off HFB and also gave a sneak preview of their 15mm ground based Halo game! It is rumoured to be landing early 2016 and I can not wait!

MSWG Sam
Posted by Midsussex Wargamers at 11:50 No comments:

''Imperial Assault puts you in the midst of the Galactic Civil War between the Rebel Alliance and the Galactic Empire after the destruction of the Death Star over Yavin 4 with two separate game experiences. The campaign game pits the limitless troops and resources of the Galactic Empire against a crack team of elite Rebel operatives as they strive to break the Empire’s hold on the galaxy, while the skirmish game invites you and a friend to muster strike teams and battle head-to-head over conflicting objectives.''

So just before Christmas last year I picked up yet another Fantasy Flight Star Wars system. Being a big fan of x-wing and not having much money, I had originally decided to stay away from Imperial Assault. ''1 expansion based minature game is enough'' I said...

...Oh how I was wrong. Our treasurer, Tom Seccombe, said that he had something cool he wanted to unbox and show for our youtube channel. The video below I think will serve as a just explanation of why the very next day I went out and bought the core set.

I didn't stop there either. Within a few months the wave 1 expansion packs were out and I had everything bar one or two. There was only one problem, these miniatures come unpainted and I really didn't fancy painting all those white stormtroopers.

Step forward Mr James Baldwin of Yggdrasil Painting. If you have attended one of our Hobbit SBG events you have probably met him, he is a regular and a veteran of our tournaments. Long story short my Imperial Assault went away unpainted and came back looking like this! He has done a fantastic job on what look like quite horrible miniatures to paint. I can't wait to start gaming with them again.

If you want to find out more about Imperial Assault including FAQ's and information of new upcoming releases (BOBA FETT!!) - https://www.fantasyflightgames.com/en/products/star-wars-imperial-assault/

If you wish to organise a game of IA then feel free to email the club at midsussexwargamers@gmail.com

Posted by Midsussex Wargamers at 09:11 No comments: 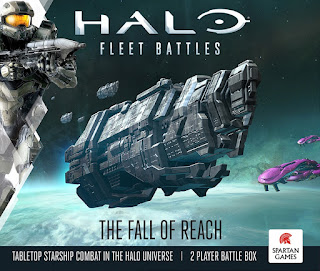 ''The Halo: Fleet Battles, The Fall of Reach two player battle box is the ultimate way for fans of the Halo Universe to recreate pivotal space battles between the stalwart forces of the United Nations Space Command (UNSC) and the relentless Covenant armada. Developed in close cooperation with 343 Industries, The Fall of Reach puts you at the centre of the most pivotal naval conflict of the long Human-Covenant War, commanding massive fleets of deadly warships as they clash above the fortified human colony of Reach. Take humanity's last stand to the gaming table!''

So last week this turned up. I'll start off by saying I am a BIG Halo fan! I have been wanting a Halo war-game since I started war-gaming in 2003 so when this was announced naturally I had to have it. Thankfully, while another space based game like x-wing, Halo Fleet Battles is more about the big capital ships rather than fighter based combat. The thought of commanding some of the most iconic ships from the Halo universe makes me giddy with excitement. 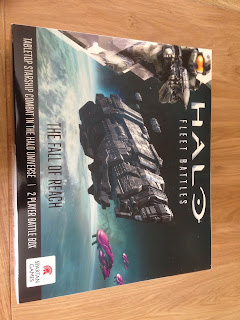 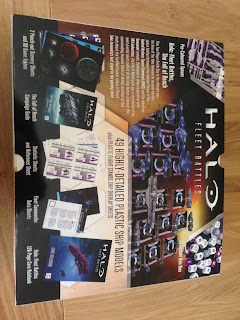 The outer box is a thing of beauty. Slick full colour artwork and a detailed overview of what is inside. The back shows painted examples of all the ships included. 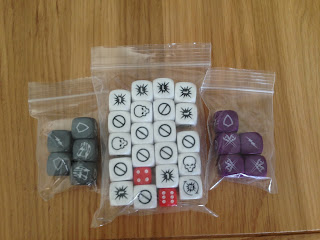 All the dice needed to play are included in the box. You get Faction specific order dice (the grey and purple ones) aswell as some funky white dice which I think are using for attacking and then 2 standard D6. 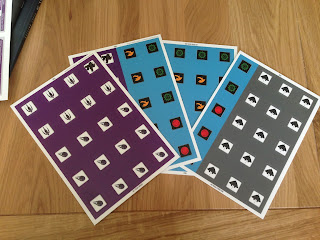 Cardboard punch out tokens to represent boarding parties, fighter wings and any conditions being suffered by ships. These look very professional and durable. 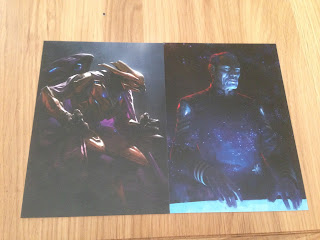 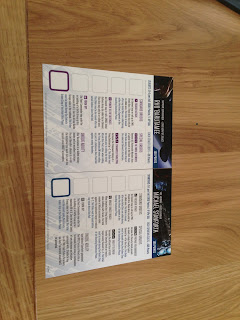 Two fleet commander cards, one for each faction. When constructing a fleet, you must have a fleet commander. At present there are only the two shown above but there are plans to introduce lots more as the game grows. 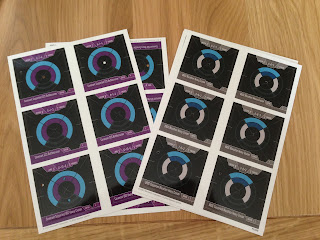 Card inserts for the ships bases. These detail various firing arcs, formations and stats of the ships on them. Like the tokens above, these look amazing and seem like they will withstand a fair amount of game time. 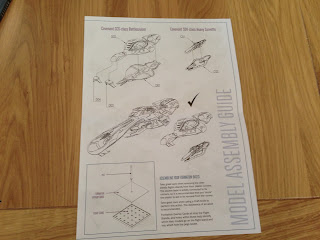 4 page instruction manual showing how to build each class of ship. As you will see in the sprue pictures later on, most ships only consist of 2 or 3 pieces. 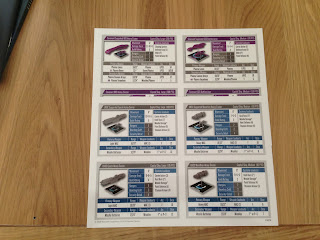 Laminated stats/ rules for everything contained in the box. There are different formations for each class of ship, some are designed more for attack whereas some are more defence orientated. 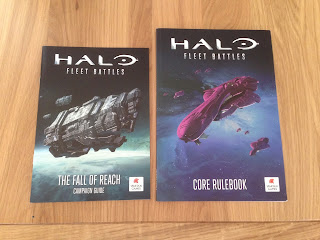 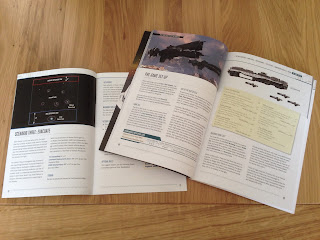 Campaign guide and Core Rulebook. Both are full colour and seem well written (I haven't had chance to read it properly yet). There are plenty of pictures and diagrams to assist with learning the rules. 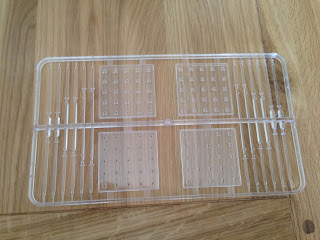 Clear plastic ship bases and stands. There are loads of these with varying heights of stand. 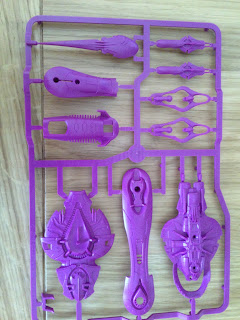 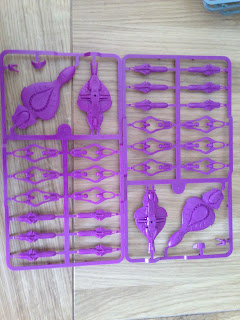 Included are two of each sprue shown above which builds all the Covenant ships. They are incredibly detailed models and look relatively simple to build. As you can see, they are on purple plastic which means you can leave them unpainted if you wish. In the future I will probably attempt painting mine. 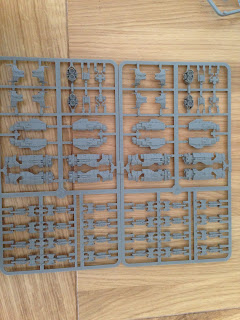 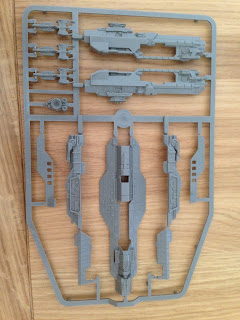 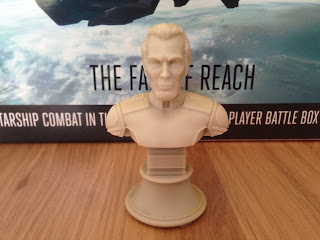 A Vice Admiral Stanforth resin bust. This was a little extra thrown in by Spartan games as a thank you for ordering during the Salute 2015 period. I'm not sure how you can get them now but I am looking forward to painting him up for the cabinet.

First Impressions: Wow what a game! And I haven't even figured out how to play yet. Everything looks stunning and I can't wait to dive into head-first and blow the covenant to smithereens.

In Part 2 I will showcase the models built  and possibly go into some detail on how the game works.

In the meantime, if you wish to come to MSWG for a game of HFB or anything else, feel free to email us at midsussexwargamers@gmail.com.

Hope to see you all soon!