''Armies of Orcs are on the move. These are fighters. They have been bred for war. Our enemy has summoned his full strength.''

By the skin of my teeth, I have completed Month 1. 1 Gundabad Captain, 6 Gundabad Orcs and 6 Gundabad Berserkers. I haven't decided on grass or snow flock yet so I am going to leave them until I can make up my mind. 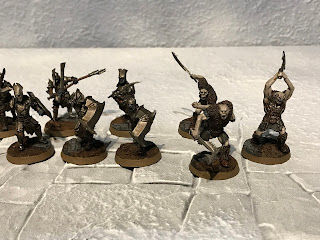 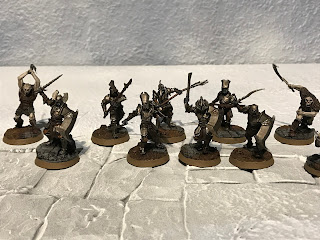 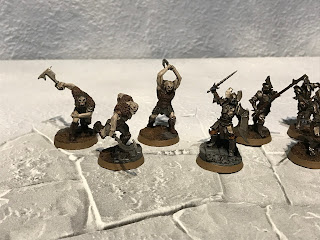 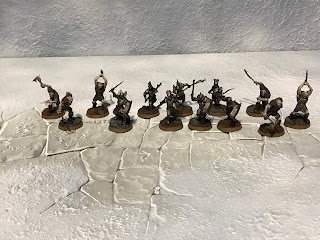 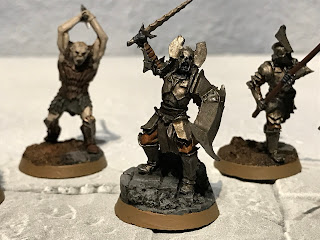 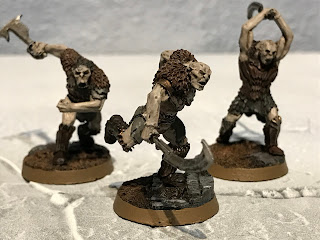 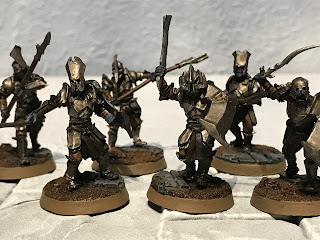 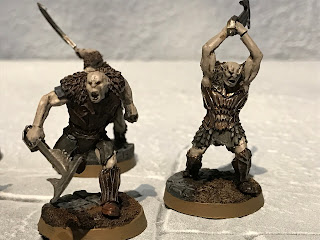 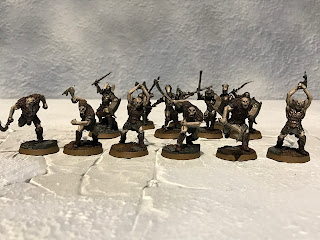 The berserkers were a joy to paint, you can really tell the difference between Forgeworld resin and Citadel Finecast. I am looking forward to painting up at least 6 more maybe in month 3 or 4.

Next up is going to be BOOOLGGGG and a Gundabad ogre to take me up to the 400pt target. It does mean I have to bench a berserker and a warrior but it is worth it to take the ogre. It also allows me to shuffle my warbands around. 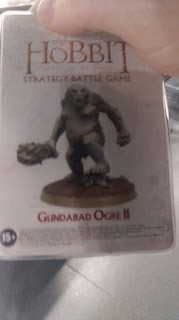 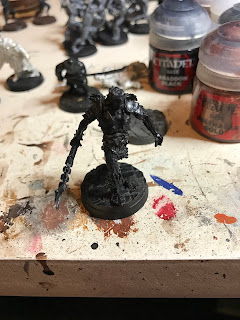 Happy Wargaming!
Posted by Midsussex Wargamers at 12:17 No comments:

"Death! That is what you will bring upon us. Dragon-fire and ruin. "


I know, I know I'm super early, The Tale of Many Gamers has already motivated me beyond belief. I doubted I'd paint much at all this year, but with not even a month past I have already completed a full warband!

I aimed to complete Bard the Bowman Girion's Heir (foot AND mounted) leading 12 Lake-Town militia (4x shield, 4x bow and 4x spear).
I can gleefully confirm my goal has been accomplished! 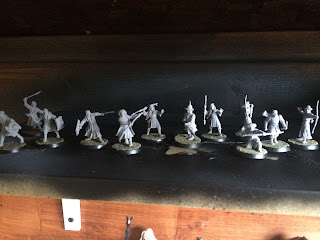 My troops awaiting battle and paint. Many I know always base after painting the model. I always sand my bases before spraying as the spray really solidifies the sand on. 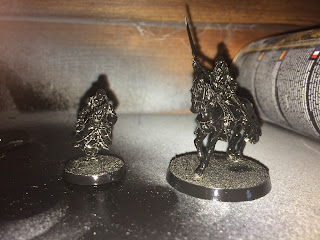 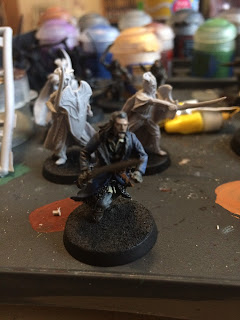 I always seem to start with a hero. It would make sense to leave them until last as a sort of reward for completing the bog-standard troops and give me something to look forward to. But if I ever play practice games with my army I don't mind having unpainted warriors, but I'd much rather have a completed hero...I feel they perform better.

Bard the Bowman is a terrific character in the books and perfectly portrayed in the movies by Luke Evans. Usually a good reason for myself taking a hero in an army is because of their part in the movie. I love how influential the "non-main" heroes are. Like Haldir, for example, coming to the aid of Rohan and triggering a chain of events that saves Middle-Earth. Bard is no different. Killing Smaug the magnificent, literally single handedly, is not only a seriously awesome scene but is crucial, again, to the survival of Middle-Earth.
So, not only is Bard cool, he also has a profile within the game to match. The men of the Lake are rendered almost useless without the leadership of Girion's Heir. His army buffs are too brilliant to ignore, and the range of said buffs make him an auto include for me. He grants his warriors re-rolls in duels, a fight value bonus and keeps them in check when they begin to rout!
He is also brilliant in combat, getting 3 attacks, and at range, potentially getting 3 shots per turn at strength 4! What's not to love about this guy. 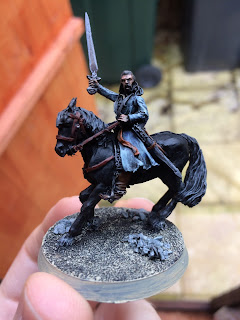 Obviously with my troops I put no where near as much effort into them as I do my heroes. But at £5 per model I'm not going to do a half hearted job. I'm happy with how these guys came out. At a distance they look great, but when you get up close they appear dirty and the armour and weapons rusty. Just as I feel they should having just been assaulted by a Serpent from the North.
I have gone for a mix of greens and blues for the men of the Lake's clothes: Watery type colours. I painted them in three batches of four so it wasn't quite so daunting. Having said that, these guys are no where near as much of a chore as previous lotr era warriors. Quite often warriors that come in a box of 12 (or 24 if you go really far back) had duplicate poses, but these guys are quite different and easily interchangeable. I would base paint the basic colours to start, then wash in agrax earthshade. Step 2 would be to dry brush highlight their clothes and then pick out any remaining details. Nothing too fancy, I'm not the best painter in the world but I'm happy with the effect I create.

I look forward to moving on with this project next month and in months further ahead when I begin introducing the Mirkwood contingent.

February I will be putting together my 400 point force ready for a battle with a fellow Tale Gamer.
With Bard and his warband already complete my original plan was going to be to add in Gandalf and just 3 more militia, which didn't leave me with much to get painted in a month where I have quite a bit of free time! My new plan is to paint up the title character: the Master Burglar himself, Bilbo Baggins. In the new rules he can lead Lake-Town militia and so my February target will be Bilbo Baggins and another full 12 Lake-Town milita. Madness!

Will the Barrel-Rider and friends be ready for battle come the end of February, we will find out in a month or so...


Until then,
Happy Wargaming!
Posted by Midsussex Wargamers at 12:29 No comments:

"Will you have peace, or war?"

SBG has played a huge part in my life since its inception in 2001. So that's now 16 years of hobbying! In that time, despite leaving the hobby between 2009-2012, I have amassed a decent collection. Restarting when the Hobbit SBG was released I have a nice mix of LOTR and Hobbit minis. I can field almost any army at 500 points but alot of armies I have are unpainted/incomplete. So, this Tale of Gamers is a great opportunity to paint up an army I've had for about a year now. I'm also excited by this project as all the new rules for these particular armies have just been released and there is more to come!

Oh, did I mention I'm doing two armies? Survivors of Lake-Town with Mirkood! Here is my 6 month plan:

"Moria had been taken by legions of Orcs led by the most vile of their race... Azog the Defiler. The giant Gundabad orc had sworn to wipe out the line of Durin."

Since the day Games Workshop released Azog and his hunter orcs, they have been one of my primary armies. With their two attacks and fell sighted wargs, they were a force to be reckoned with. They even made it into SBG Issue 2 (which you should check out here SBG Towers).

A few years have passed since then and now we have the There and Back Again source book which gave The Hobbit SBG a well deserved boost. After an in-depth analysis (and a well time Christmas present from my parents) I decided to upgrade my Hunter orc army to an Azog's Legion army. It is time to unleash the hoards of hell upon the battlefields of Rivenstead and beyond. 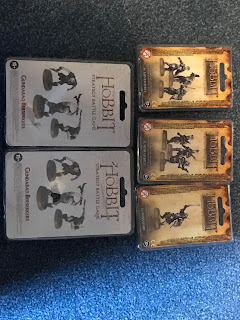 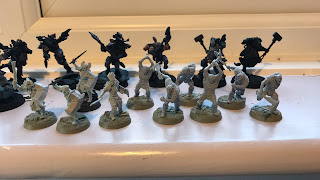 There is most of my month 1 warband built (ignore the wulfen behind, they will probably appear in another article at some point). Unlike the others, I have not planned out my force but will instead go by what Forgeworld release. So expect to see Ogres, Gundabad Trolls and more berserkers in the coming months.

Until then, Happy Wargaming!
Posted by Midsussex Wargamers at 12:53 No comments:


I've been collecting Lord of the Rings SBG for over 14 years now and have amassed a pretty sizeable collection with bits and pieces from across the range. The downsize of this being that there isn't actually a single army that I haven't 'made a start on'. 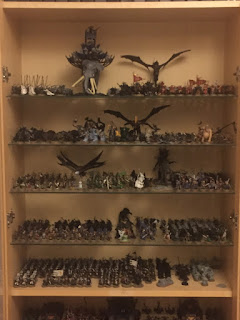 After examining my collection I decided that the force that needed the most work was my Fiefdom army. So far all I had painted had been the Army of the Dead element of the faction but had never quite got around to starting the living elements of the force. I had undercoated Forlong, a couple of Captains and some Knights but that is as far as I had got. This seemed the perfect opportunity to give them some long outstanding love. After six months I should have a fairly sizeable force and I am already looking forward to using them at The Return to Rivenstead tournament at the end of June.

· 1 Knight of Dol Amroth with Banner

Here is the first model I have painted this month, testing out the proposed colour scheme. 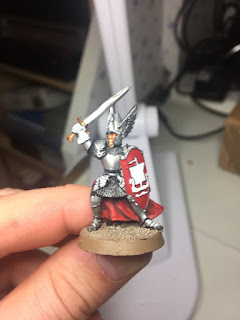 Posted by Midsussex Wargamers at 02:18 No comments:

Tale of Many Gamers - LotR/ The Hobbit SBG 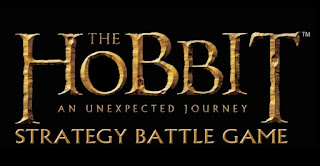 Over the course of the next 6 months participants shall build and paint a new army totalling to the sum of approximately 1000 points, they shall be required to complete new models each month and using their army in tabletop skirmishes as the months progress. Players shall be awarded points for playing in these battles, completing their selections and completing other tasks related to their armies.

5 points for having a fully painted and based 1000 point army.

Keep an eye on the blog for status updates as the participants start to build and paint their armies.

Happy Wargaming and Support your Hobbit Hobby!
Posted by Midsussex Wargamers at 15:26 No comments: 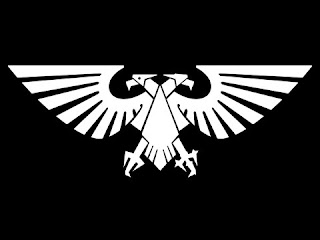 
Happy Wargaming!
Posted by Midsussex Wargamers at 15:12 No comments: