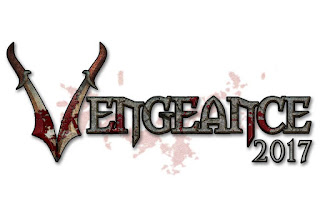 The sun is shining, I have a cooked breakfast in my belly and I can sense it, today I am going to play better Guild Ball...maybe.

Game 5 - David Rider - Brewers (Tapper, Hooper, Scum, Stoker, Friday, Spigot)
David was a lovely bloke and his Brewer's were painted to the highest quality. If I recall correctly, I lost the kick roll and was forced to kick for the 4th time in 5 matches. Mist kicked off and the ball ended up on Spigot. Benediction then used Stand Firm on Brisket to give her Sturdy. Mist, using a combination of Shadow Like and cover then managed to dispossess Spigot for my first goal. A great start for the Union. David then kicked the ball out and it landed at Tapper's feet...well within Brisket's territory. Hooper tried his best to avenge the goal by wacking Mist but fortunately he was left on 1 health. As my last activation, Brisket ran into Tapper and promptly tackled him, the Sturdy from Benediction proving a useful deterrent to the counter attack knock down. I then used Worth Sacrifice (Brisket's Legendary) to 'teleport' to Mist, allowing him to dodge to safety and allowing Brisket to take a clear shot at goal. She didn't let me down. 8-0. From the goal kick it landed at Tapper's feet again. Turn 2 I won the initiative roll and  loaded up Decimate with 4 as she was well in range to charge Tapper and use that sweet T <<. I also loaded up Brisket just in case Decimate fluffed her lines and needed to finish the job herself. Decimate didn't let me down. Needing 4 3+ on 10 dice, she easily hit the result I was looking for and tackled the ball of Tapper, simultaneously dodging into range of the goal and out of Tapper's melee zone. A swift dice roll later and it was all over. 12-0, What a contrast from yesterday!
WIN: 12-0

Game 6 - Chris Rutter - Union (Veteran Rage, Strongbox, can't remember the rest - sorry)
My first Union match up of Vengeance and it is against Veteran Rage. This is going to be bloody (or so I thought). Just as we were setting up, Chris mentioned he wasn't feeling to great and that this would probably be a quick game. He won the kick roll but much to my surprise, he elected to kick to me. I retrieved the ball and passed to Mist who dodged up the field and promptly scored. 4-0. Chris then kicked it out the his A&G who then did their usual shenanigans and scored back. 4-4. Brisket then ran up the pitch to score my second. 8-4. Veteran Rage then took out Mist to make it 8-6. At the top of Turn 2, Chris scored a snap shot screamer with Greede to make to 8-10. I believe the ball then made it's way out the Brisket who promptly scored and won the game. A fun game of Guild Ball, but had Chris been feeling 100%,  it would have been a lot tougher for me.
WIN: 12-10

Still, after 6 games I was now sitting on 3 wins and 3 losses which considering the start I had made on Day 1, I was over the moon with. Round 6 could have been the last round if James Long had lost on table 2 (due to how Guild Ball is played to one clear winner) but he stormed to victory meaning we had to play Round 7.

As it was lunch, everyone was asked to leave their armies out on the pitch so the organisers could go and vote for Best Team and Best Goal. I knew I wasn't in with a shot but I set them up anyway. 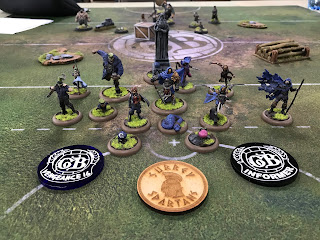 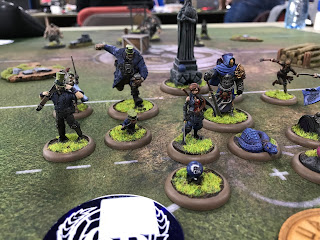 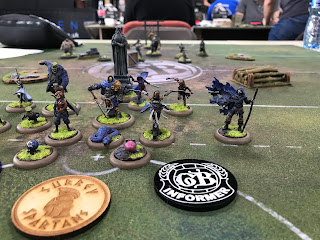 Game 7 - Chris Tamplin - Hunters (Skatha, Snow, Jaecar, Seenah, Vet Hearne, Minx?)
Chris is a fellow Southern Pundit but despite that, we had never played before. I was semi happy to see Skatha picked as his captain, she likes to play football and I'm unsurprisingly ok with that, Turns out Mist did not want to play football in this game.
For the second game in a row, I received the ball and Mist set off an a little adventure towards the Hunter's goal. He promptly scuffed it wide, the ball hitting the post off the scatter roll. Chris didn't retrieve the ball with Minx (as she charged into Mist) which I found odd as it left Brisket able to her Legendary Play to snap the ball with Mist. Brisket then used I'm Open on Mist but as already stated, Mist was not interested and playing Football and his pass was way off target.


Not going to lie, that missed pass was a sucker punch. I should have been 8-0 up but instead it was 0-0 with my 2 goal scorers in a dangerous position as Seenah and Jaecar were still to activate. I don't mind losing my strikers if they get the goals first as the VPs gained is worth it. Alas, the game must go on. I still played my natural game, hoping Chris' dice would decide to copy mine at that crucial moment. I lost two players and Skatha scored before I could reply With Aplomb with Brisket to take it to 8-5. Skatha then retrieved the ball again and after bouncing off a surrounded Decimate, scored to take the win.
LOSS: 5-12

With that, my Vengeance 2017 experience was over. I was gutted to have not won that final game, those 2 failed kicks from Mist killing any chance I had of winning. Such is the way of dice games. It was only that game (and the Snakeskin shot against Mat Hart) where luck was against me so I'm not going to complain...much haha. My final tally was 3 wins and 4 losses placing me 87th out of 116 players. Not great, but better than where I was on Day 1.

After playing an entire tournament with just Brisket, it is clear she is probably the 'weakest' Captain for the Union. Blackheart and Veteran Rage are the two to take (if you are going competitive) but Brisket was so much fun. Even when my opponents were sure she couldn't score, she still gave it a damn good go. I also don't regret taking Benediction in my 10, he was AWESOME when he was on the pitch. If anything, Minx is probably in the running to be dropped out in favour of a second Captain. In a football team, she doesn't do much. Overall I was happy with the team I took and bar some bad luck, the results could have been so much different.

Vengeance as a whole event was fantastic. The TO team were great, even when Tiebreak exploded after the first round. They kept everything flowing, there were no delays and I can think of negative that needed changing.
Massive Congratulations to James Long who managed to win a pulsating final match and therefore with the event with his Midas led Alchemists. #TeamNottsOP.

If you want to watch any of the streamed games, head over to the Steamforged Games Youtube Channel.

Posted by Midsussex Wargamers at 00:41